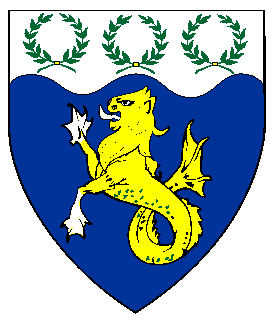 Please Join her Excellency, Baroness Elsa Von Aurich at Heron's Pool, a tournament to determine her champions. Both a Dandelion Lord (heavy fighter) and a Lotus Lord (rapier fighter) will be chosen through honor, gallantry and noble combat! Snacks and appetizers potluck in the afternoon, bring something to nibble upon.

There are three Arts and Sciences competitions planned!

Two winners will be chosen, one for its merit as an accurate portrayal of our Baronial heraldry, and one as the best artistic interpretation of the Allyshian Sea Lion. Entries must be scannable (i.e. 2D, not sculpture) and no bigger than 11″ X 17″. Winners will be chosen by the populace and will be awarded a custom tee, tank, or mug with their choice of either of the winning designs, and will have the honor of knowing their art will live in on the Barony.

So many people in our barony do amazing things with fiber! Bring out your best pieces completed in the last two years along with documentation. The winner will be chosen by Their Excellencies and a panel of three judges. Prize for the winner!

The Middle Ages was filled with ideas about how to prevent illnesses. Bring an example of a plague prevention device you've made and documentation about what it is and how it was supposed to work. This competition will be judged by Their Excellencies and a panel of whatever medical professionals are present and willing to judge. Prize to the winner!

You say one tournament isn't enough? For those who wish to fight more, there will be a William Marshall style Ransom Tourney later in the day.

Pets are allowed, dogs must be leashed. West Kingdom Fire rules apply, above ground fire pits OK. Water on site is probably OK to drink, but don't drink out of the horse trough.

From 101 South: After passing the highway 299 junction take the Giuntoli Lane exit. Go around the round-about and head over the overpass. Get off on Janes Road.  Follow Janes Road until you see Mad River Community Hospital on the left (about 1/3 mile).  The event will be on the the field to the left of the hospital.  Look for SCA signs!