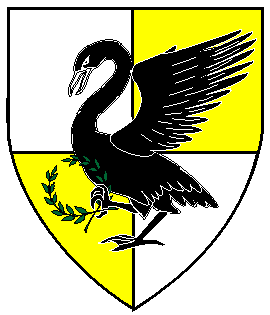 As Cynagua begins Her celebration of 35 years, you are invited to spend a wondrous 4-day weekend with Walerich and Catriona, Prince and Princess of Cynagua, for Their Coronet Tournament. Our event site is again located in the breathtaking Sierra Mountains within the charming community of Quincy, CA at the Plumas Sierra Fairgrounds.

Spring Coronet Tournament restrictions and requirements: All entrants into Coronet will be required to submit a letter of intent. This may be done via email to Their Highnesses at heirsofcynagua.gmail.com. This letter will contain their intent & their consort. Each fighter is required to have this letter delivered to Them no later than the Thursday, May 22, 2014, prior to coronet. Fighters may also choose to submit a hand written letter of intent to be handed to Them in person at the event. Anyone that chooses to submit a letter in person will have their letters presented during the A & S display at Coronet. Then Their Highnesses will be signing those letters and returning them to the fighter as a memento of Their Coronet. There is a residency requirement; all fighters must have Cynaguan residency or be fighting for a Cynaguan consort. There will be a great weapons round in Coronet, most likely in round 3. Prepare! Her Highness wishes to request that all entrants into Coronet fly a banner; as well, she requests that all those that have a pavilion or sunshade on the Lists field fly a banner as well. She would love to look out across the field & see banners flying in the breeze.

Her Highness would like to invite all consorts to a "Consortium" on Saturday. Please come and join your fellow Consorts on Saturday morning for a time of relaxation & socializing! Being a consort isn't all about looking lovely while standing on the sidelines. You are your Lord's page boy, water bearer, fetcher of all things &, most importantly, his inspiration. You deserve some time to pause & prepare for the big day with the other consorts of the Principality; mayhap you could share what being a Consort means to you. Most of all.... MIMOSAS! (We don't discriminate; ALL are welcome!)

Equestrian Information Cynagua Spring Coronet: 16th Century themed mounted games known as the Equestrian Masque will be performed Saturday on the eric. By gracious permission of their Highnesses of Cynagua, riders will present themselves on the Lists Field Saturday, May 24th, for games on the eric. Sixteenth century clothing, masks, & caparisons are appreciated, but NOT required. There are other games scheduled for Saturday’s entertainment in the covered arena. Covered pipe pen corrals are available at $25/weekend (up to 2 horses in a pen). For further information on reserving a pen, equestrian authorizations and renewals, possible rental horses or scheduling other equestrian activities at this event, contact Equestrian Marshal-in-Charge: Gwendwyn the Silent bulotki@yahoo.com, Subject: Horses at Coronet, or phone 916-397-9850.

Lord Defender Tourney with The Princess’s Tea on Monday during the tournament. Any wishing to contribute, please contact Countess Arianwen. Help is greatly appreciated!

Lastly, this is the weekend of Her Highness's birthday! We will be having a party to celebrate. Come to the Royal on Sunday night after dinner. There will be dancing, fun, and games and plenty of libations. There are a number of secret things planned, as Her Highness has never had an actual party thrown for her.... so join in and make this a night that she will never forget!! Email Countess Arianwen if you would like to help or contribute in any way. arianwen.morgan@yahoo.com

For those of you who are not inclined to put on armor and fight in the lists, there will be other activities as well, from the Bard of Cynagua competition to Arts and Sciences.

If you plan to merchant, please let the autocrat know at least two weeks before the event.

Take your best route to Quincy. Do NOT use your GPS, Garmin, or other navigation device, or you may end up in the wrong place! Once in Quincy, go through town to the fairgrounds. There will be SCA signs.