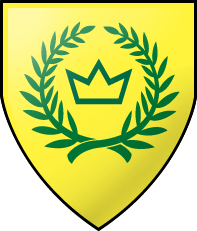 Friday March 25th, 2016 to Sunday March 27th, 2016
Napa, California
Come and join Their Illustrious Majesties in the selection of Their Heirs. The tournament will be a different format this time. Please see the words from His Majesty below.
Competitions:
Arts and Sciences will once again hold the Wreath of Athena competition. Entries are judged by populace vote.
The Wooden Spoon competitions for the year are based on colors. For March Crown it is White Food
Tournament Description from His Majesty:
Invocation and challenges will remain the same, and the list will be run as a standard double elimination tournament, with standard West Kingdom armor conventions.
The big difference will be that fights shall be to counted blows, no acted-out wounds. What this means;
• All fights are to 3 good blows struck
• Fighters still call their own blows
• ALL TARGETS COUNT THE SAME, a hit to an arm, leg, head or body counts as one good blow.
• There will be a pause when a good blow is struck, to allow fighters to reset. This way, people who drop an arm/leg out of reflex are not penalized
• If a flurry is landed, only the first blow counts, as a pause is enacted after a good blow
• Double strikes count against both fighters. If you trade a leg for a head, both fighters earn one point.
• Double kills are destructive. If there is a 2-2 score, and a double hit occurs, both fighters take a loss on their record. This will only change in finals, where a double kill will be re-fought. Finals will still be a best of three fights.
• Although no one “dies” in a counted blows tournament, We are asking fighters to take a knee and salute, so that bystanders can understand the outcome of a fight.
Autocrat: Katrina Yarbrough
Site Information:

From 80 East: Take the 37 W exit towards Napa. Get off at the CA-29/ Sonoma Blvd exit going towards Napa. Turn right at the bottom of the off ramp. Continue for 7 miles until you get to a split. Take the Lake Berryessa/ Downtown Napa exit to the right and continue for 2.5 miles til you get to Imola Ave. Turn right on Imola Ave. and the park entrance is approx. 1 mile on the right.

From 80 West: Take exit 39B to merge onto CA-12 W/ Jameson Canyon Rd toward Napa/Sonoma. Go about 6 miles and turn right on to CA-12/ Napa/Sonoma. Continue until you get to a split. Take the Lake Berryessa/ Downtown Napa exit to the right and continue for 2.5 miles til you get to Imola Ave. Turn right on Imola Ave. and the park entrance is approx. 1 mile on the right.

From CA-12/121 (Carneros Hwy): Turn left on CA-29 North. Exit Imola Ave and turn right at the light. Stay straight on Imola for 2.4 miles (approx 6 minutes and 5 lights). Entrance to park will be on the Right.